Call it an overhaul, call it a gentle purge but whatever is going on in Beijing is pretty significant. Yesterday, the Beijing Ducks announced that Yannis Christopoulos, a long-term assistant coach with the Chinese national was taking over as Ducks head coach.

Min Lulei, Christopoulos’ predecessor and one of the CBA’s most decorated coaches, will now take up a role within the Ducks front office. For watchers of Chinese basketball, these are remarkable times.

END_OF_DOCUMENT_TOKEN_TO_BE_REPLACED 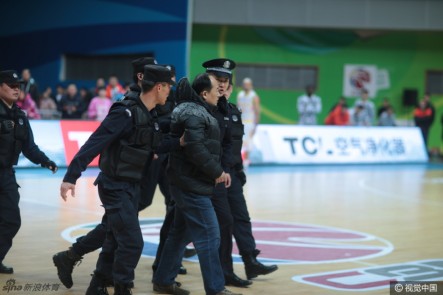 Its been a while since I’ve been able to write, mostly due to holidays and work commitments but in the meantime, the CBA has been bonkers. It should be stressed that there are many good things going on right now (there is no obvious favorite for the title! Young Chinese stars like Ding Yangyuhan and Wang Zhelin continue to play well!) but at the same time, when I finally found the time to start blogging, the most obvious news story was what happened last night in Jiangsu Province.

So let’s recap. The Jiangsu Tongxi Monkey Kings have been, to put it bluntly, a joke for most of their short CBA existence. Based in the city of Changzhou, the team with no squad depth has struggled to even sniff a mid-table spot and are whipping boys for most of the CBA’s big sides. For the most part, Tongxi seem content to live with this as they slowly build up their organization. But one thing that does mean a lot is their local rivalry with the Jiangsu Dragons, who are based in the far more pleasant city of Nanjing. It is on that note that we take a look at the most recent clash between the two neighbours. END_OF_DOCUMENT_TOKEN_TO_BE_REPLACED

After a summer of obituaries to a fine basketball team, somehow the Guangdong Tigers will not die. After being blown out by almost thirty points against the Shanxi Dragons in Game 1 of the regular season, it felt safe to finally say the most dominant CBA team of the last decade was done. But instead, Guangdong are 17-3 and sitting in second place in the table. They are on course to make the postseason and force their way into the title discussion once again. On paper, it makes no sense. END_OF_DOCUMENT_TOKEN_TO_BE_REPLACED

As with most basketball leagues, CBA cheerleaders are ubiquitous and part of the home team’s attempts to keep the fans engaged and the atmosphere suitably zesty. But this week, the cheerleading crew of the Shanxi Dragons almost sparked a stadium riot and the league office have been trying to recover ever since.

END_OF_DOCUMENT_TOKEN_TO_BE_REPLACED

Equally impossible for spell check and opposing defenders to figure out, Ding Yanyuhang is arguably the most exciting story going on right now in the Chinese Basketball Association. The twenty-three year old forward is averaging 22.3ppg and coming off a four game stretch averaging almost 31 points a night. In an era of American dominance, these might not seem like gaudy numbers but within China– where local scorers are an endangered species– this is something to celebrate. END_OF_DOCUMENT_TOKEN_TO_BE_REPLACED

If you haven’t already guessed, Chinese basketball is a highly complicated, incredibly political landscape. Yet somehow, the events of the past few days in Guangdong have been especially unprecedented and will be a storyline to follow for the whole of the current CBA season.

Now, we should probably pause  to recap some stuff. Regular readers of Shark Fin Hoops will know that the Guangdong Tigers are a fading but extremely important dynasty. The Tigers’ rivalry with the Bayi Rockets defined the early years of the Chinese Basketball Association and Guangdong went on to win eight titles in thirteen years. The cornerstones of this success were the local players and although Yao Ming was the face of the national team, players like Du Feng, Yi Jianlian, Zhu Fangyu and Wang Shipeng all played on multiple Olympic teams during that time. A hugely successful core, Yi went to the NBA in 2007, Zhu almost went in 2004 and Du and Wang may well have got their shot had they played for another team in China that did not require such strict adherence to team-first basketball. END_OF_DOCUMENT_TOKEN_TO_BE_REPLACED

High level Chinese prospects, like comets, don’t come around all-too-often but when they do, it makes sense to put time aside and be there for the moment. Indeed, given the widespread dominance of imports and increasing irrelevance of Chinese players in their own league, there’s currently not a lot of homegrown guys to get pumped over. This seems set to change with the looming debut of Fan Ziming.

The teenage seven-footer, who reportedly weighs in at a solid 250lbs, has been on the radar in China for several years but was only cleared to play in the CBA once he turned eighteen back in April. In the meantime, he has been gathering solid numbers at the youth level and like Zhou Qi and Wang Zhelin (who both turned pro after similar gap years dominating their school-age counterparts in 2012 and 2014 respectively), is now a source of huge interest.

END_OF_DOCUMENT_TOKEN_TO_BE_REPLACED

Just when you thought you had seen it all, we have another Chinese guy making an NBA appearance, although only for some Summer League action. While last year He Tianju, while largely unproven by any NBA standard, was surely a top tier player by CBA standards, this year’s new additions are far more of a mystery, sometimes even by CBA standards.

Let’s find out who these two guys are then, shall we? END_OF_DOCUMENT_TOKEN_TO_BE_REPLACED

Not since 2007 have Chinese players heard their names called in the NBA draft. History tends to forget that two mainlanders were drafted that year (Yi Jianlian to the Bucks and Sun Yue was also selected by the Lakers in the middle of the second round). Either way, by 2011, both players were out of the NBA and since then, there has been an awkward absence of Chinese players in the world’s biggest league. That was, until last Thursday, when Wang Zhelin and Zhou Qi both were selected.

END_OF_DOCUMENT_TOKEN_TO_BE_REPLACED

Along with the emergence of Zhou Qi, a familiar habit has occurred within Chinese basketball; namely the complete shifting of media focus from one NBA hopeful to another. Four years ago, Fujian’s Wang Zhelin was the dashing young star destined to go to America but after a disappointing season in 2016 and still no play-off appearance on his four year old resume, the beefy power forward feels like yesterday’s news.  That said, NBA teams should not discount the draft eligible big man and Marco Catanzaro is here to explain why. END_OF_DOCUMENT_TOKEN_TO_BE_REPLACED