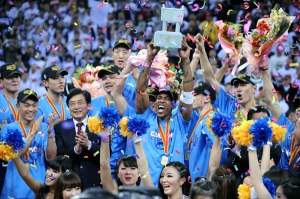 With the CBA set to start on Sunday, November 1st, CBA teams are gearing up for another season of wall-to-wall basketball. Having dealt with the bottom half of the league last week, now its time to look at the teams who will be expected to compete for play-off sports and ultimately vie for the title itself.

Preview: Having spent a proverbial kings ransom on making sure they have the best local and foreign rosters in the CBA, its essentially a journalistic obligation to make Xinjiang the preseason no.1 team. Loaded in almost every position, they can essentially run out two different line-ups and still beat most teams in the league. As ever, the Tigers’ biggest issue, particularly during the regular season will be themselves and their fans’ expectations. This is the first season the Tigers have been the unquestioned number one team in China since they splashed the cash on Kenyon Martin, Patty Mills, Bob Donewald (then China’s national team coach) and of course promptly exploded under the pressure. If they can keep it together mentally, they could pick up 34-35 wins in the regular season. The only minor problem that leaps out will be how Xinjiang keeps everyone happy. In the backcourt, Crawford, Xirejian, Liu Wei and Cao Fei are all going to want their shots whilst the front court rotation of Tang Zhengdong, Blatche, Su Wei and Zhou Qi is also going to be a little crowded.

Preview: Age might be starting to creep in for a Chinese roster that has dominated Chinese basketball for a decade. Last season’s brutal semi-finals loss against Beijing made it clear that the Tigers can’t get by with so-so foreign imports which is why they’ve got younger and better with Mudiay, who will be a galvanizing force in the Tigers backcourt. The mix of youth and experience will be a huge plus for the team throughout the year but the primary goal for Guangdong is to assert itself over Beijing, the Tigers’ bogey team for the last three seasons and steady its nerves for what the inevitable clash in the postseason. Other than that, Tigers fans should sit back and enjoy a regular season that should be a relative breeze.

Preview: Few teams have had to re-organize themselves more than the defending champions after the league’s new ruling on foreigners in the fourth quarter. Previously, the Marbury/Morris pick and roll was probably the most destructive thing in Chinese basketball but now its not going to be a factor in crunch time. Given the ruling, it seems likely that Marbury will finish out games because he is such a talisman for the team but it will put enormous pressure on the Ducks frontcourt, who will have to put in big shifts because Morris will not be there to be the focal point of the big man offense. Expect to see the regular season as the Ducks’ opportunity to practice how they deal with the fourth quarter conundrum for the games that matter.

Preview: Dongguan’s ‘plug in and play’ point guard led offense found its best operator last season in the form of Bobby Brown and after signing a new deal, the American guard will be back for a further two seasons to put up thirty shots a game and terrorize defenses. Donte Green spaces the floor well and can make it rain from the perimeter if left unguarded. Moreover, with Green slotting in at power forward, Dongguan can essentially run out four shooters and then a back-to-the-basket big man down low. The Leopards’ way of winning games is simple but effective; Brown is the main option, Green is plan B; Gu Quan will be lurking by the perimeter as a fail safe. Rinse, repeat until the team wins thirty games before losing in the play-offs once it meets a team that can shut down Brown for long periods of time.

Preview: Unabashed shit bags Liaoning have somehow managed to land the best player in China last year after spending the summer making Chinese basketball look very bad. The addition of Hudson is an odd one given that they will now have a weird backcourt that will take some getting used to. Neither Hudson or Guo Ailun will be happy to watch the other take the ball up the court so there could be some friction there. If things do get going though, this could be a dangerous team. Li Xiaoxu is a rebounding machine by Chinese standards and Han Dejun, despite having eaten his potential (straight up: he could have been an NBA center but he couldn’t leave Mama Han’s cooking) is a top five Chinese center when interested in the game.

Preview: Shanxi could potentially get back to their glory days of three years ago when Marcus Williams and Charles Gaines were lighting teams up on defense. The faces are different but the roles are the same. Wafer will have the ball in his hands most of the game and will be allowed to shoot at will if the defence gives him room. Orton is an interesting choice for Shanxi considering that he has no experience in the CBA. The team opted to let Byron Mullins go, which is an odd decision (the team decided he did not fit Shanxi’s offensive scheme) as his shooting range would have helped space the floor a little better and open up room for Wafer. That said, Orton is a big body and he will be able to push people out the way down low, thus giving the Dragons two decent scoring options. The big factor on the team is Zaid Abbas, who is now with his sixth team looking to make the play-offs; previous employees Beijing, Shanghai, Fujian, Tianjin and Shandong all made the postseason with him at power forward. Abbas is not a glamour player; he screams at his teammates, opposing teams, their bench, their fans; anyone who he wants to basically. He is pure intensity and Shanxi, who have been awful for the last two years will need it to get back to the play-offs. Head coach Yang Xuezeng, one of the better local coaches in the league, is also back with and he will be a huge part in taking the Dragons back to the play-offs, and the last time he was the Dragons’ coach, he created one of the most fun teams in recent memory. That side routinely blew out almost everyone it came up against and the league is widely seen as having colluded with Beijing to give Stephon Marbury more time to recover in the play-offs and thus ensure the Ducks overcame the unfashionable Shanxi team to make the 2011 CBA finals. The cornerstones of that team were a ball-handling shoot-first guard in Williams and a bulky, low post banger in Gaines, and it appears that in Von Wafer and Daniel Orton, Yang has replicated the two core pieces plus retained streaky swingman Duan Jiangpeng as a hold-over from the 2011 side. 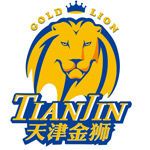 Preview: The Lions made the play-offs for the first time in their history and will be an decent shot to do it again this year. Zhang Nan is as a quietly reliable player that will get you 15 points and 6 rebounds a night although this might be the last season he can do it. Quincy ‘scored 75 points in three quarters‘ Douby will shoot A LOT and could win or loss some games for Tianjin this year. Williams was probably the best American big man in the league behind Randolph Morris last season and defensively was a nightmare for anyone matched up with him in the paint. He will basically the only one legitimate defensive positive on the team and his ability to turn back the tide when the other team has the ball in their hands will decide whether the Lions make it to the postseason for two years in a row.

Preview: Shandong have an odd knack of being sneaky good and they could creep into the play-offs this year given that other middle-tier teams have lost key players to injury or free agency. Jeter will take all the shots he wants whilst Chinese small forward Ding Yanyuhang is really growing into his role as a scorer who can be relied upon to get key buckets. Raduljica is a giant body that should be able to dominate against the majority of Chinese big men and although he won’t be posting massive numbers, as long as he can provide steady defense and rebounding, the Lions would take 15+10 out of their second import without too much complaint.

Preview: Zhejiang watched one of the team’s better local players Cao Fei leave for the Xinjiang Tigers during the preseason and power forward Ding Jinhui also tried to force his way out of the team, purportedly to go to Xinjiang or another team with title aspirations. New signing Charles Gaines is a force at PF and remains one of the most feared and respected big men in the league. He will be a guaranteed 18 + 10 man for a team that is still struggling to find any kind of escape from the mid-table purgatory they have been stuck in for the last few seasons. The trouble will be how the team fits Gaines in along with Ding, the team’s best remaining player and another player that is best suited for playing power forward. Errick McCollum will score a ton of points and has years of experience playing overseas.

Preview: The return of the beloved JT Prada, who took the team to the play-offs a few seasons ago is a start to stabilising the team after a couple of awful seasons. Two years ago, the team finished in the bottom five amid some of the worst basketball that year, Last season, the team loaded up on offensive fire power, hoping to win games by simply scoring more points than the other team. That tactic didn’t work out as the locker room dissolved into infighting as players argued about shots and missed defensive assignments. Yet there is little to suggest that this season will be much of an improvement; the bench is still not great and there doesn’t seem to be a lot of defensively minded players coming into the team. Instead there is more shooting, which could be fun to watch but not if you’re statistically inclined. Corey Fisher is a freewheeling point guard that will be able to jink past his man if he can exploit the match up whilst Al Harrington should probably see a lot of time at power forward where he will get his points but also space the floor for Wang Zhelin. Indeed, this essentially is what the team’s playbook comes down to; giving Wang, China’s ‘next big thing’, the space he needs to go to work. If Wang steps up and gets it done, its difficult to predict where the Sturgeons will finish. The problem though still seems to be defense and this ultimately could be their biggest problem once again.