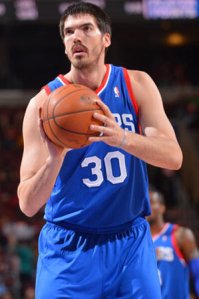 The Shanxi Dragons have completed the retooling of their overseas roster following the acquisition of former Bobcats/Hornets and Sixers big man, BJ Mullins. The signing now means the Dragons have a pretty formidable trio of imports and Mullins will slot in well next to Zaid Abbas and Von Wafer.

The Mullins move tops off a promising offseason for Shanxi, who are looking to rebound from their awful 10-34 season last year. With Marcus Williams and Charles Gaines both departing amid the uncertainity of whether Shanxi would be moving to Beijing, things did not look good for the Dragons. The offseason moves have changed everything and though Shanxi’s bench unit is still very weak, they now have a five-man rotation that will be a match for most in the CBA.

As it stands, Mullins will presumably be the starting center, where his outside shooting will confound more than one local big man this year. Shanxi will have to hope that Abbas can make up for Mullins’ defensive shortcomings but from an offensive prospective, this frontcourt could be fantastic for the Dragons given how they will be able to space the floor. Shanxi still have swingman Duan Jiangpeng, one of the league’s streakiest shooters on the books and now with Wafer also set to be lurking on the perimeter, the Dragons have the same sort of firepower they possessed three seasons ago. Then, with Williams, Gaines and Duan, Shanxi were the dark horses no-one in China wanted to play and were only eliminated in the play-off semi-finals through hugely controversial circumstances against eventual winners Beijing.

The lack of a proven point guard in Shanxi means that a return to a ‘run and gun’ style would be less devastating than in 2011 but on paper, this is a very much improved team.