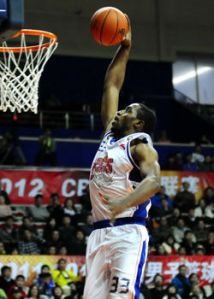 Shanghai extended their home record to 8-1 with an easy 92-75 victory over the Shandong Lions, although the result came at a considerable cost after an injury to Sharks star, Ryan Forehan Kelly.  The forward had to be helped off the court before halftime and will have an MRI scan on Monday.

Shandong were the quicker side out of the blocks in the first quarter and Alan Anderson helped his side race into an early lead before Liu Wei calmly helped his side peg back the visiters without too much difficulty.

What the Sharks skipper had started, Meng Lingyuan continued, and the shooting guard’s all-action performance in the first two quarters would help his side build up the lead that they would keep for the remainder of the game.

However, Meng’s excellent work would go unnoticed after Forehan Kelly fell to the ground after an innocuous collision in his own backcourt. The forward lay on the court clutching his leg and a concerned Sharks squad came out en masse to help their man to the bench. The home side were winning comfortably, 49-32 but the bigger story was now the injury to one of their key players.

With Coach Panaggio having no doubt rallied his side at halftime, Shanghai returned after the interval with noticeable intensity. At one point, Meng crashed into the advertising boards whilst chasing a misplaced pass, before bringing the crowd to its feet with an acrobatic lay up shortly afterwards.

When Meng wasn’t pumping the crowd up, a ferocious dunk from Ji Xiang or the gleeful, unrelenting way that Wang Yong was chasing Anderson around the court was enough to keep the noise level deafening.

All of this was becoming too much for the visitors, who were behind by as much as 22 points. At one point during the third quarter, the Yuanshen speakers blared out the theme tune to Mission Impossible as Shandong were bringing the ball down the court, and it seemed that even the PA announcers were getting in on the fun.

Despite Shanghai being up 69-53 going into the last twelve minutes, Shandong would have been mistaken if they thought the hosts were going to take things easy and wind the clock down.

Darting lay-ups aplenty from Feng Tian set the staff for yet another thunderous dunk from Mike Harris, who shimmied past two opposition players before firmly placing the ball between the hoop.

When he returned to solid ground after hanging from the basket for a few seconds, the American couldn’t stop himself from pausing to take in the noise from the crowd. Having wowed the home fans with a catalogue of big threes, tricky shots in traffic and now the close range fireworks, Harris knew it was his night and was savoring every second.

Indeed, though Anderson was still rampaging around the paint on his way to eventually scoring 22 points, as a contest, the game was done.

Shandong’ swingman cut a forlorn figure as the fourth quarter ebbed away, and was constantly bellowing at Sun Jie, who was having a torrid time against Feng, to focus more on the movement of the young Shark point guard.

As Shandong tired and toiled in the midst of constant Shanghai pressure, there was still time for Harris to dispatch one last dunk after Liu’s pass had given him the time and space to casually stroll towards the rim and finish the game with a flourish.

The buzzer would sound shortly afterwards with Shanghai cruising to a 92-75 victory. Harris scored 36 points, Feng made 16 whilst Meng and Liu picked up hauls of 13 and 10 respectively against a Shandong outfit that quickly found themselves on the receiving end of some electrifying basketball from the home side.

However, the potentially serious injury to Forehan Kelly puts all of the above in perspective. This was a bitter-sweet victory’, Panaggio noted in his press conference, who praised the performances of Meng, Feng and Xi, before adding ‘we played very well and Mike Harris was sensational, but Ryan also got injured and he’ll go for an MRI scan on his Achilles tendon tomorrow’.

When asked about his New Years wishes, the Sharks coach was blunt; ‘I wish Ryan didn’t get hurt, and now I hope he gets better soon’.

The Sharks will now have to hope that 2012 doesn’t start with the same luck that blunted the start of their CBA season back in October.